Bike Path Salmon, and Get Your Face... 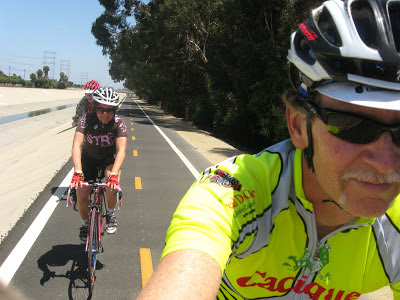 That title was getting a bit long; it will become clear in a minute though.

The past weekend's biking activities included some time for a family ride along the San Gabriel River Trail to Seal Beach. All told, a thoroughly enjoyable time was had; the wife will take any family time she can get (this included going to see Man of Steel with us, though she had absolutely no interest in it), the son (mysteriously) proved that he can still drill it mile after mile even though he rarely sits a bike anymore, and I, well, any day on the bike is a good one. But, I also have a couple gripes to share.

First up, the bike path salmon. Each and every time I have ridden out on the SGRT over the past couple months or so these contrary riders have been out and about. Sometimes they ride the same direction as me, just on the wrong side of the centerline and I have to wonder if they are going to suddenly realize they are not in Ireland, or England, or Australia, and swerve back over to the proper side of the path just as I am about to pass. These salmon are the slightly less annoying kind, since all I need do is make a little noise to make them aware of my presence. The salmon I can't seem to figure out are those who come straight at you, all the while in the wrong lane. Bike path "rules" are about as simple as they get, so I wonder are these people wasted, or are they just plain stupid? Do they think we are engaged in a game of bicycle chicken? I am not talking about looky-loos who drift across the line and then self-correct. No, there have been riders who have come straight at me while looking straight ahead as we come closer and closer together. My parents did not raise a fool, so rather than go ahead and collide, I have moved over, thankful that there was no oncoming traffic at the time. 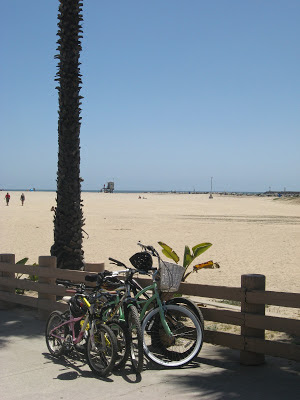 Second gripe: Summer is here, school is out, Seal Beach is a popular destination. Every day of the week groups of teens are utilizing the convenient, easy way to the shore. They are riding their mountain bikes, cruisers, fixed-gear bikes and road bikes, what ever they have. They have body boards on their backs, baskets full of towels, sunscreen and who knows what all else, their helmets dangle from their handlebars. And they have their phones, faces pressed firmly into those little screens, where they are keeping up to the second tabs on all their important friends. Girls, girls, girls (I am sorry for the sexism, but they really have all been girls thus far) get your faces out of those phones. It is one thing to cause an oncoming rider to swerve out of your way because you are not paying attention; if just one time that oncoming rider cannot avoid you, there will be a greater price to pay.

It is a great time to ride the bike path to the beach. It certainly beats heck out of the more popular option; I mean have you seen the traffic problems down there? Just ride aware, and you will get there.
Labels: bike path scofflaws distracted riding salmon riders