That hundred year old steam shovel was sitting there just waiting to be "discovered," all I had to do was pick the correct single track branching off the main road and voila...
The Coquina Mine, its steam shovel, and other mining remains was just one of three goals for this day; the others were to explore the upper reaches of Las Llajas and Sulphur Canyons, and the given goal -  to simply check out a new-to-me trail. Beyond those, if I was able to get a little further along the road to Rocky Peak, well, so much the better. Las Llajas Canyon and the mostly dirt, sometimes broken pavement road that heads up the canyon bottom lies just over Santa Susana Pass at the east end of Simi Valley. The general area lies on the southern edge of the Santa Susana Mountain range, an area made popular among mountain bikers by the great John Tomac who used to ride these hills, canyons and rocky ridges. Various park lands intermingle here including the Marr Ranch Open Space, Rocky Peak Park, Indian Springs Open Space, and the Michael D. Antonovich Regional Park at Joughin Ranch. It is a big, largely undeveloped piece of land crisscrossed with dirt roads and trails just waiting to be explored.
The canyon bottom is studded with stands of oak, a few cottonwood and willow along season streams and, though the temperature was quite nice today, during the summer months I am sure it can be unbearably hot with long shadeless stretches of steep road should you choose to climb up above. Just past the junction with Rocky Peak Road we ran into a big locked gate with no trespassing signs marking the boundary of the Poe Ranch. Bummer since Google Earth shows numerous ruins just beyond. Well -  so be it. I / we would not meet that upper Las Llajas / Sulphur Canyon goals on this day. Instead we rode up Rocky Peak Road, as far as a nice canyon overlook. After shooting a short 360º video the nagging desire to find the mine took over, and we turned tail to head back down canyon.
I had a fair idea where the trail to the mine branched off, I just didn't know what to expect after that. Unfortunately I didn't closely study the map beforehand; if I had I would have known that a second trail junction was just around the bend from where we stopped and turned around, and that that sketchy trail continuing along the slope ahead of us was not the one we would need to take. Oh well, now I know and next time there will be nothing to distract me from the destination. What can I say, it was still a nice outing. If only I didn't have to put up with all that bumper to bumper traffic to get back home. 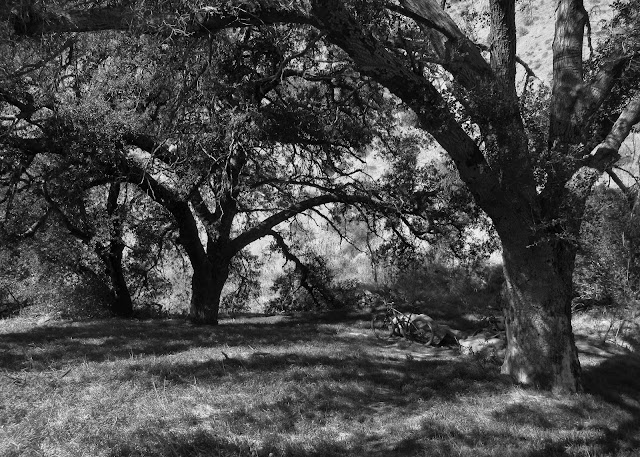 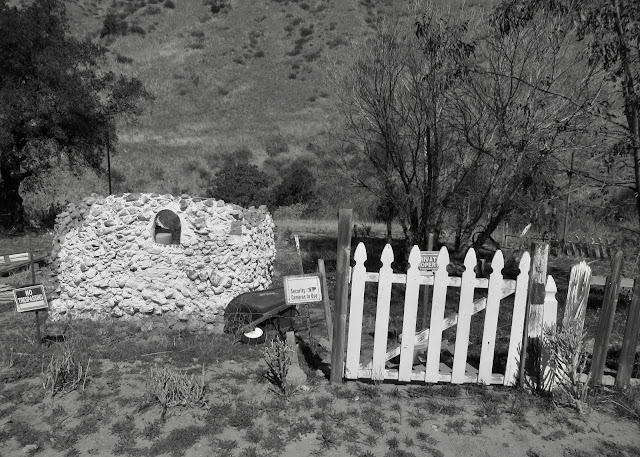 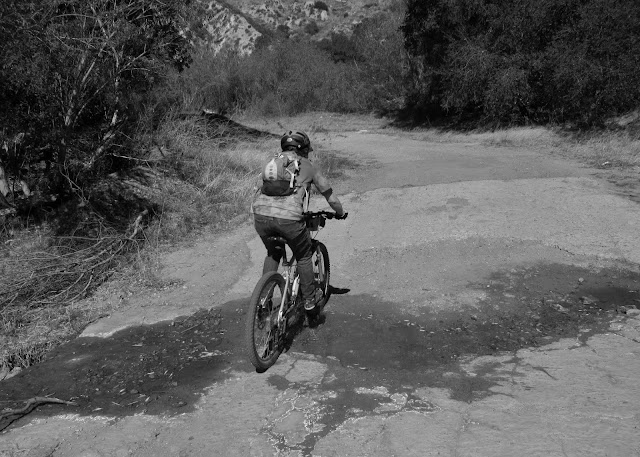 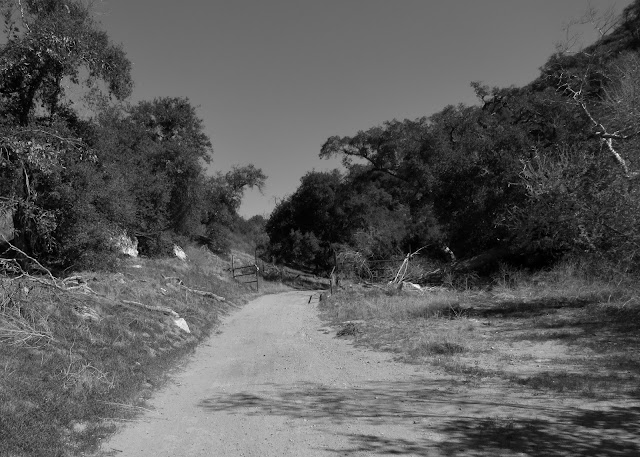 gate not baring the way, but what's that swinging from the gate post? 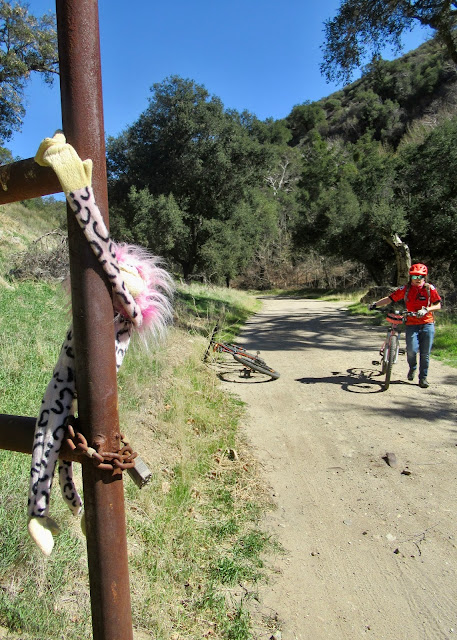 ah, a monkey of course 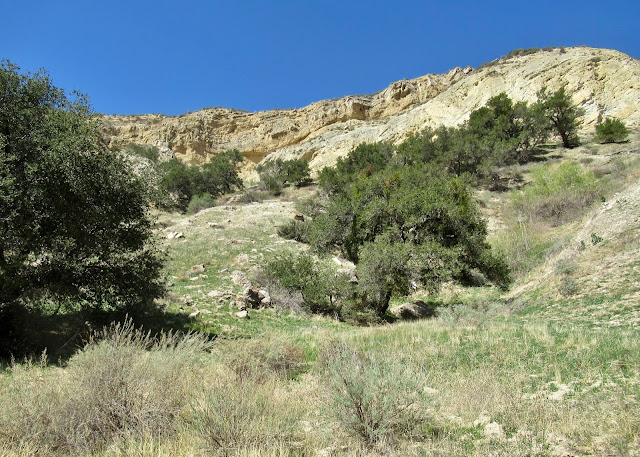 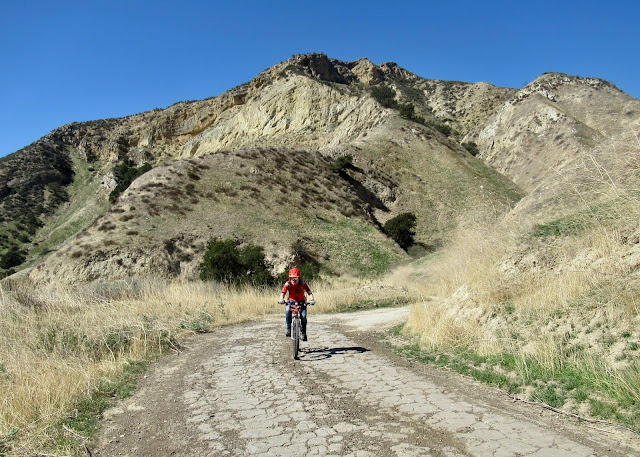 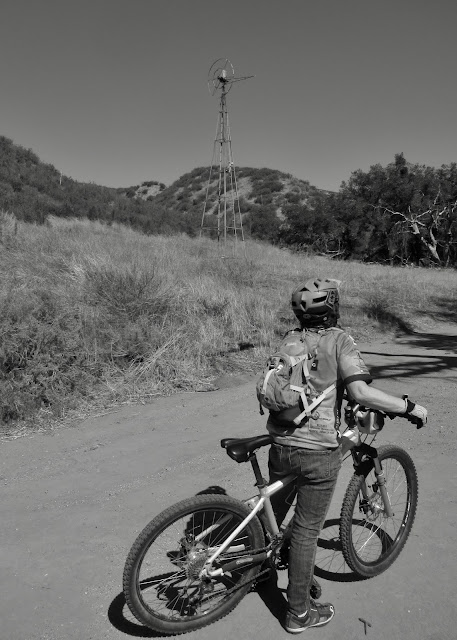 old windmill, but what is that climbing it? 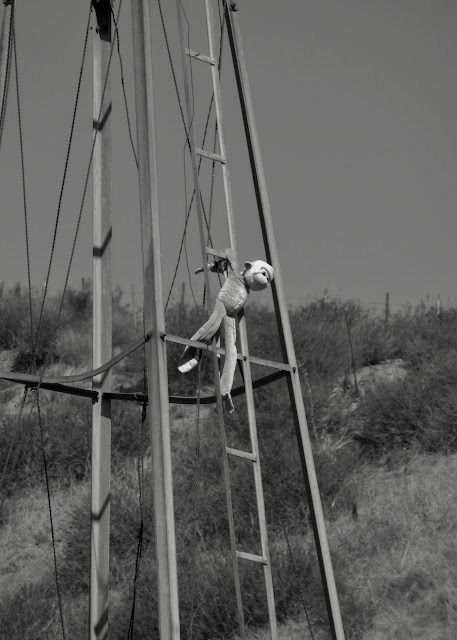 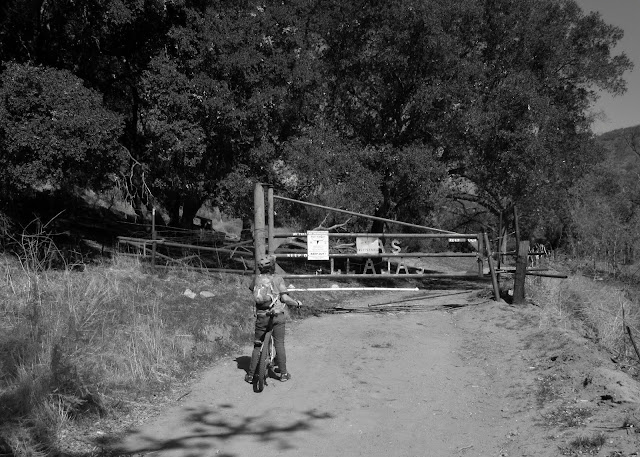 can't go any further this way 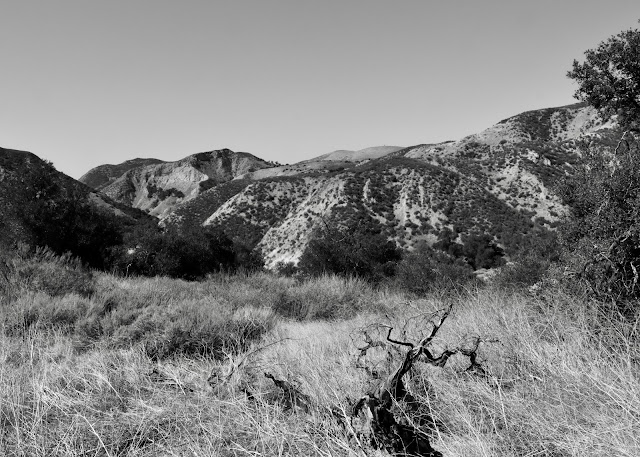 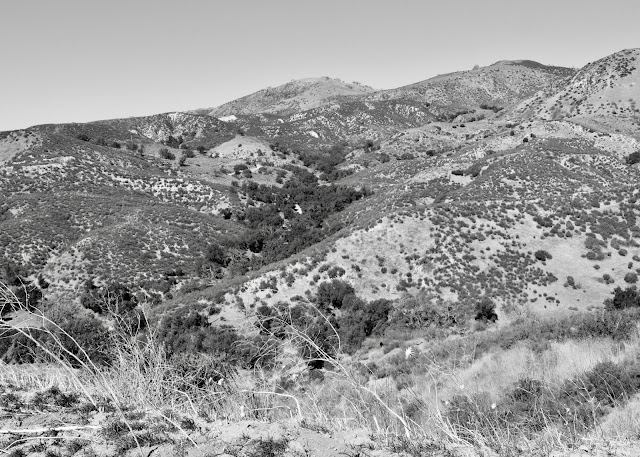 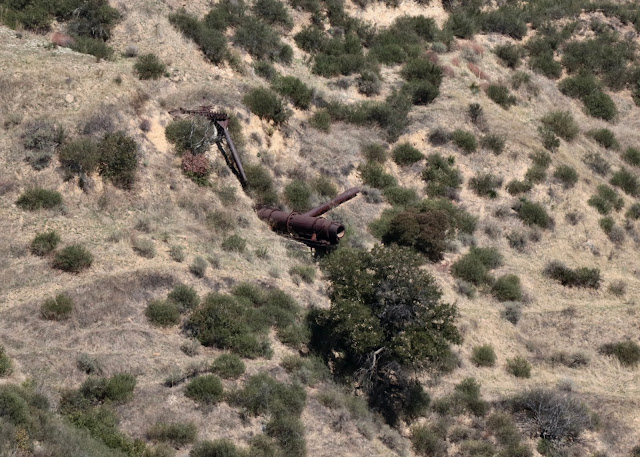 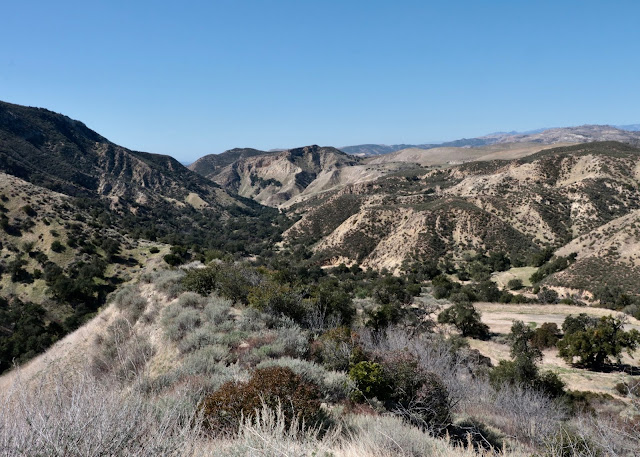 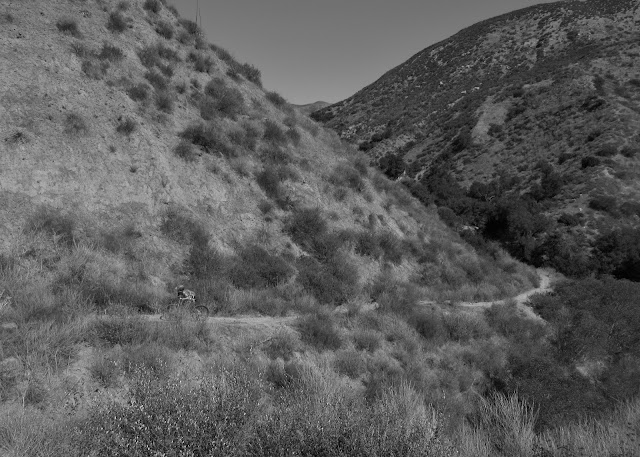 beginning to climb the single track to the Coquina Mine 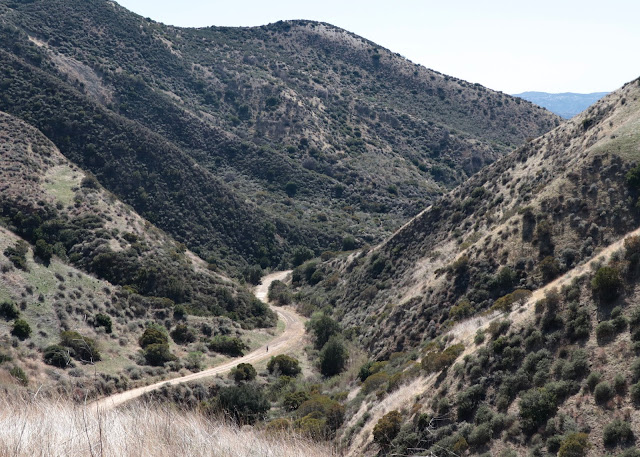 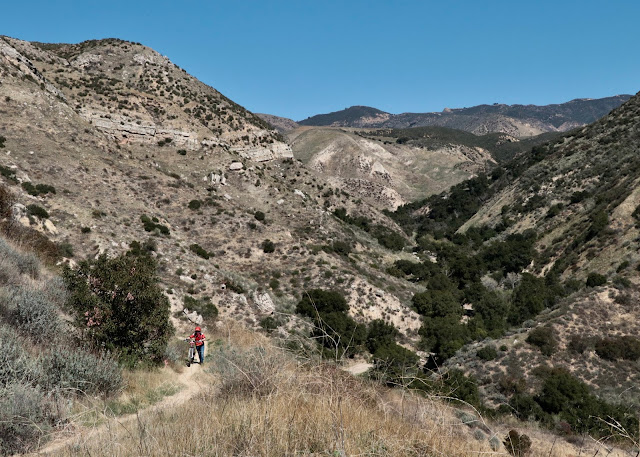 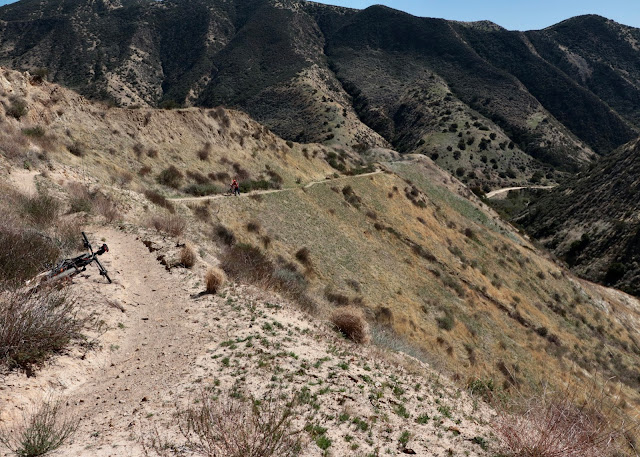 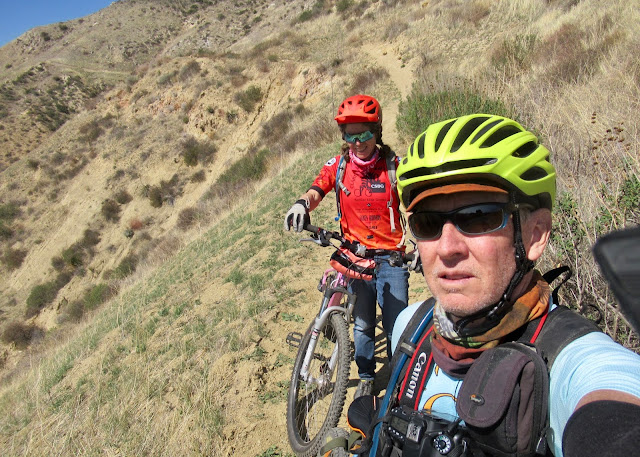 there is some exposure too 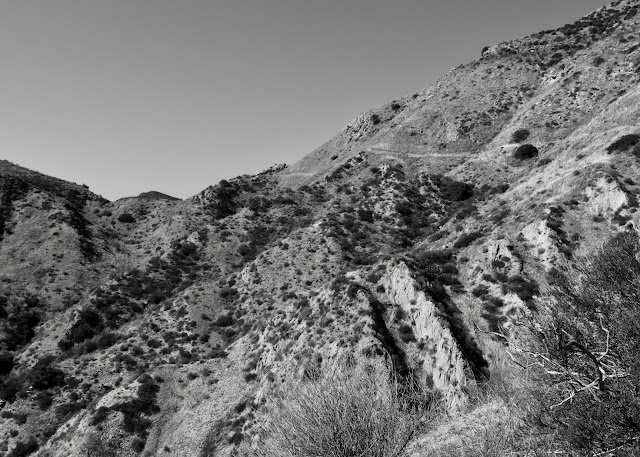 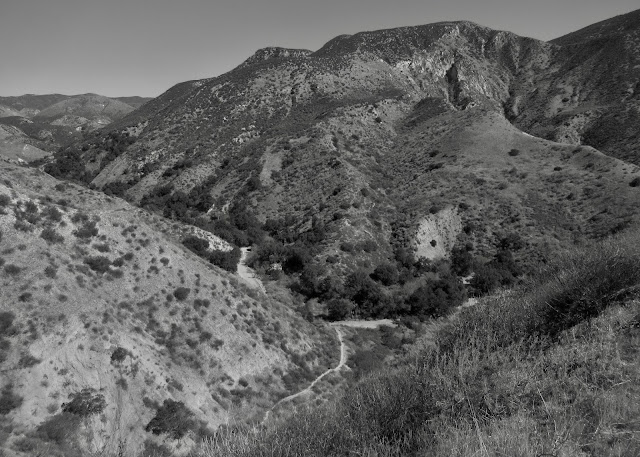 road and trail from up above 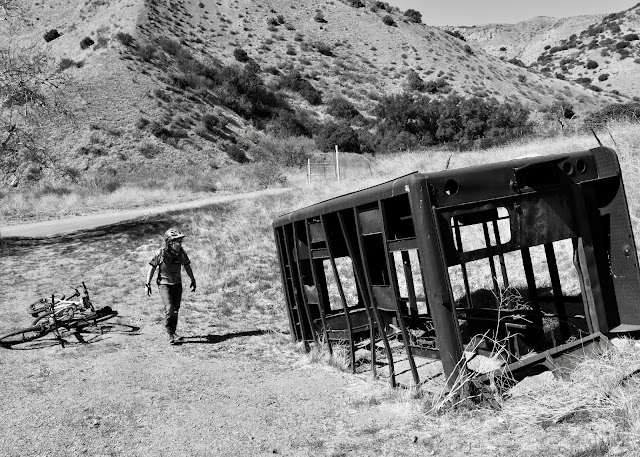 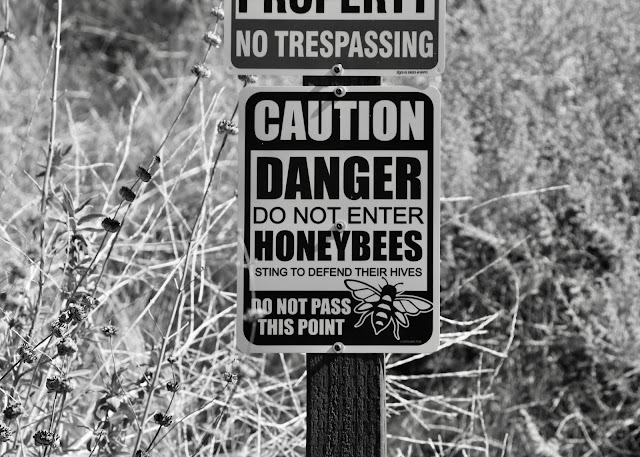 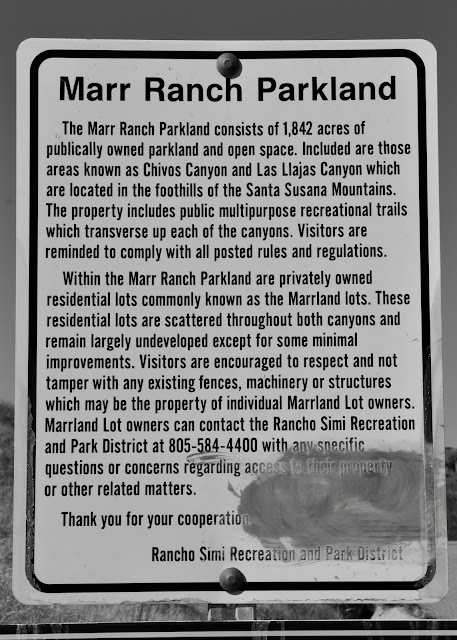 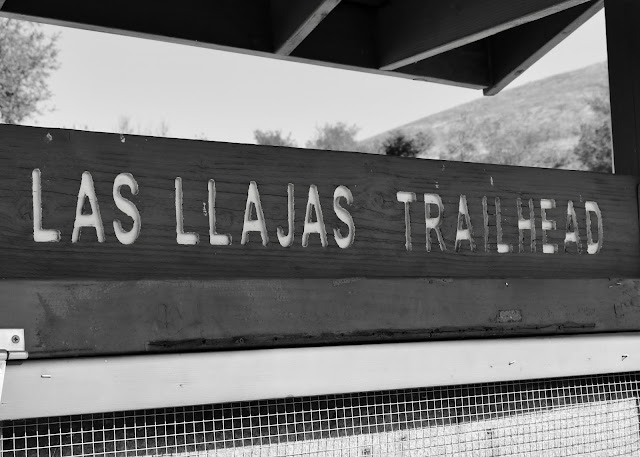