Some of you will know that, on Saturday just past, I rode on the not yet open Foothill Boulevard separated bike lanes, or at least one section of the east-bound lane, and posting a couple photos at the Claremont Cyclist on FB. Sunday morning, following a bit of gravel riding, and on my way to the Village, I rode some more, this time on the west-bound side of the street.

For those who might be unfamiliar, the Foothill Boulevard improvement project covers the length of the street between the city limit on the east (roughly Monte Vista), and the city limit on the west (roughly Towne Avenue). The improvements include sidewalk enhancements, including new sidewalk where it did not previously exist, expanded planting buffers between street and sidewalk, water filtration bio-swales in both the planters and medians, new class II bike lanes, and new class IV separated bikeways. Other improvements are more aesthetic - landscape planting, boulders, and city entry monumentation.

For reasons that should be obvious, the focus here is on the bicycle transportation improvements. 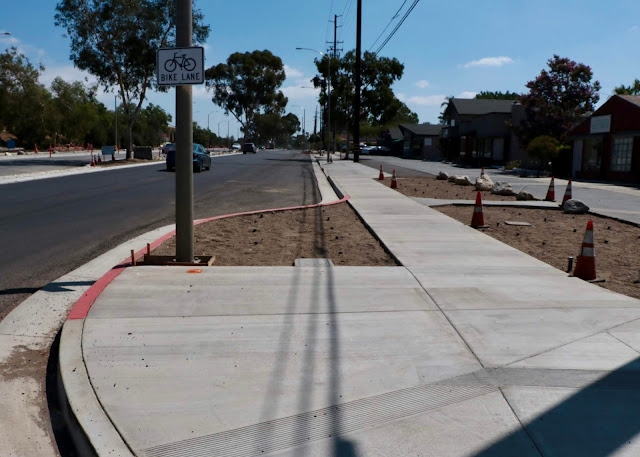 Bulb-out at the corner of Yale, looking east along Foothill. This section will have a Class II bike lane and, I believe, retain the curb-side parking for businesses fronting the street. If you look far enough ahead you will see the next bulb-out at Harvard. 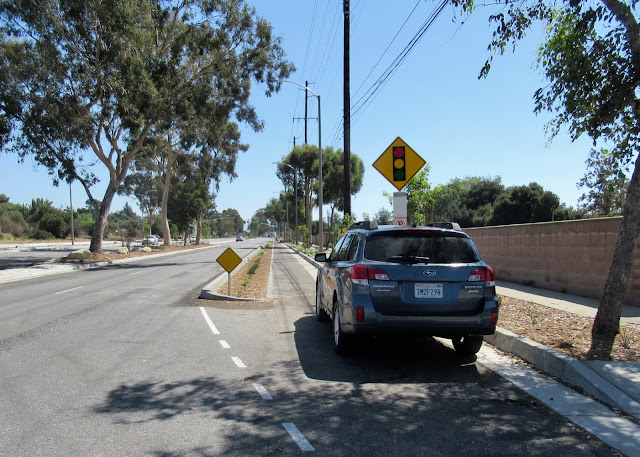 Still east-bound Foothill, the separated lane begins just past Amherst and ends just before Mills. It is mostly complete with new trees, shrubs and ground covers planted and the planters mulched. Typical for the separated lane you will notice that the curb is raised on the street side, but flush with the paving of the bike path. If you saw the post at Claremont Cyclist on FB I noted the potential problem with parking at the beginning of the path here. It will, no doubt, be addressed. 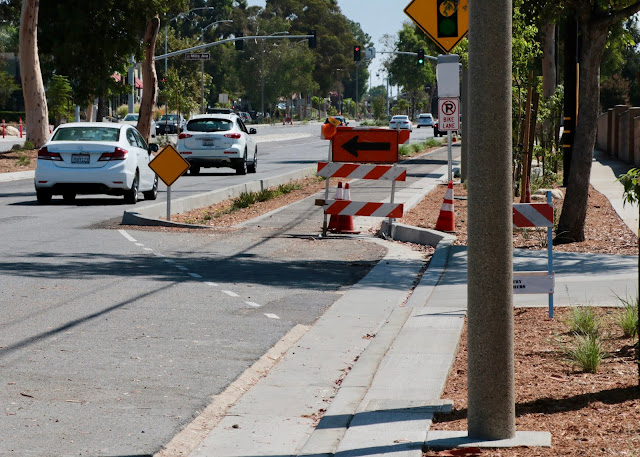 Same place as above, but skewed perspective due to fore-shortening. 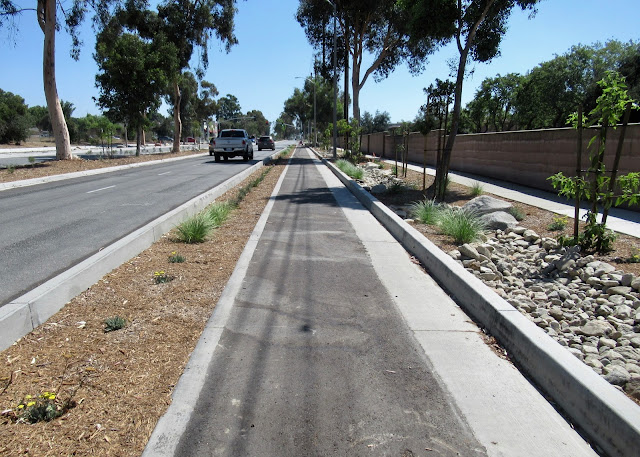 The east-bound lane, still between Amherst and Mills. 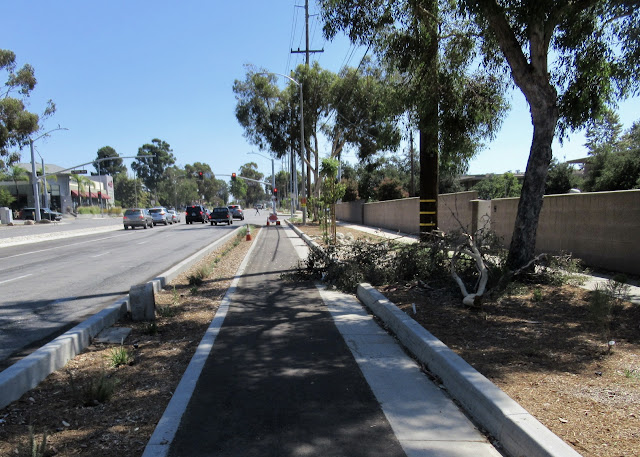 The east-bound lane, still between Amherst and Mills, but showing one occasional maintenance issue - falling limbs from the Eucalyptus trees. 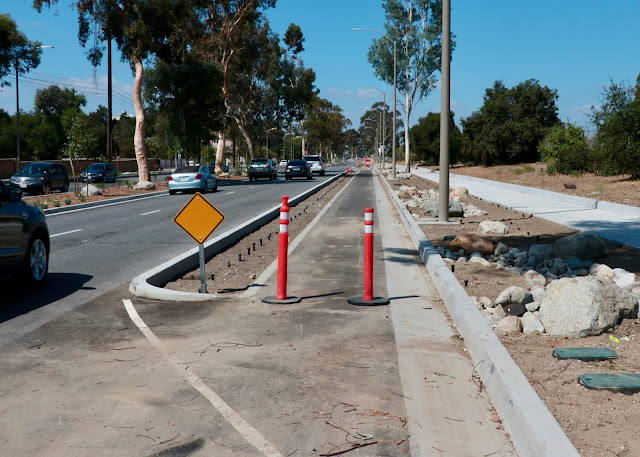 The west-bound lanes are less far along, though most of the hardscape is in place. This is the first section of separated lane beginning just west of Mills, and runs to the Bernard Biological Field Station driveway. Previously there was no sidewalk on this side of the street. 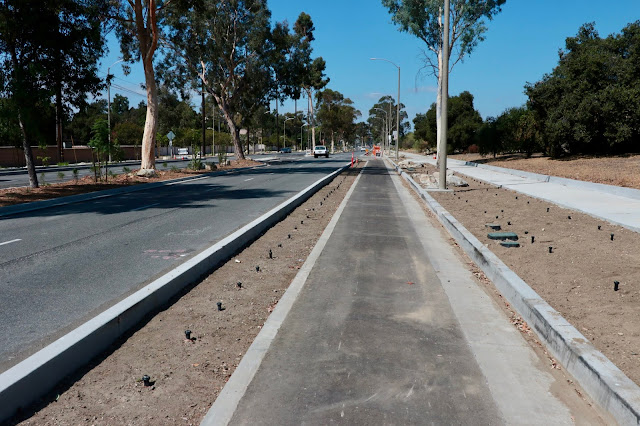 More of the west-bound lane between Mills and the Field Station. 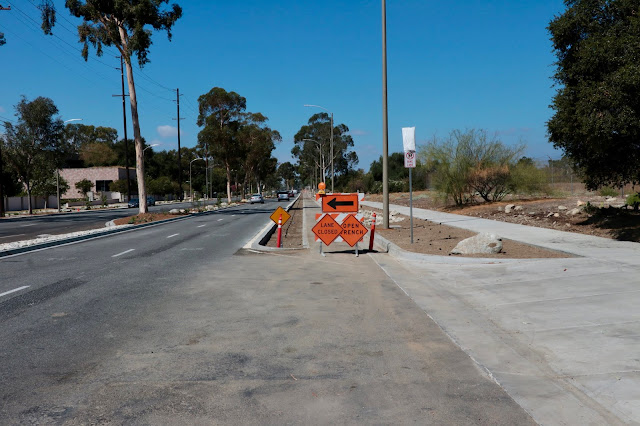 Driveway at the Field Station with the separated lane picking up again. 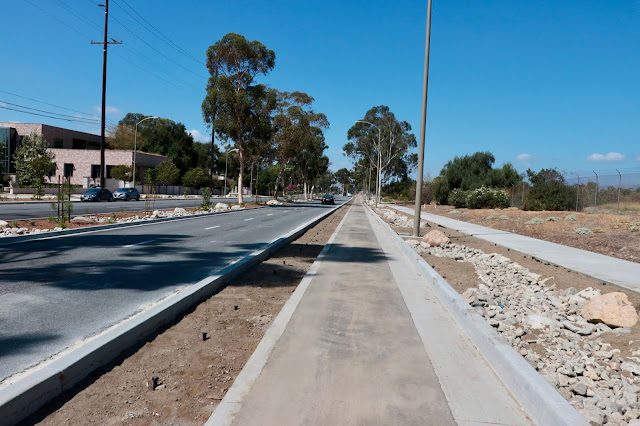 The section of separated lane west of the Field Station is the longest uninterrupted section, running all the way to Dartmouth, the only light-controlled intersection between Mills on the east, and Indian Hill on the west. 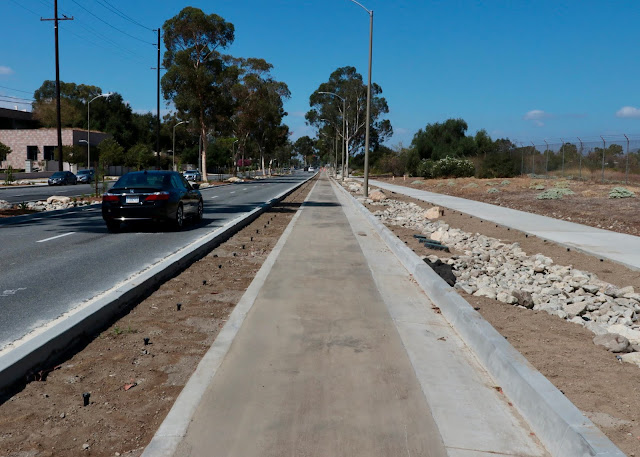 More of the west-bound lane between the Field Station and Dartmouth. Again, the sidewalk is also new, as is the cobble bio-swale. 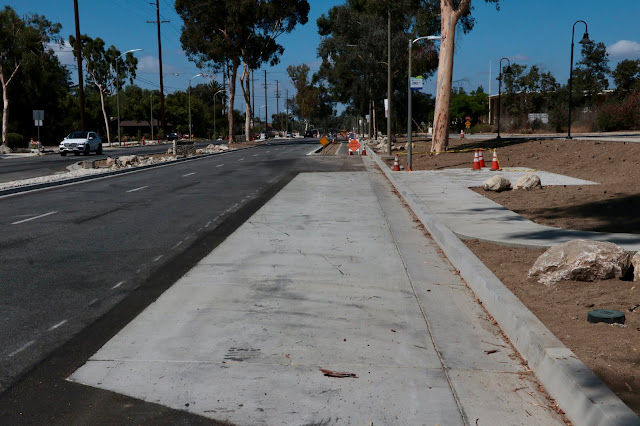 Just west of the Dartmouth intersection. I am assuming that a Class II bike lane will occupy the gap between sections of Class IV lane here, in order to accommodate the existing, but improved Foothill bus stop. 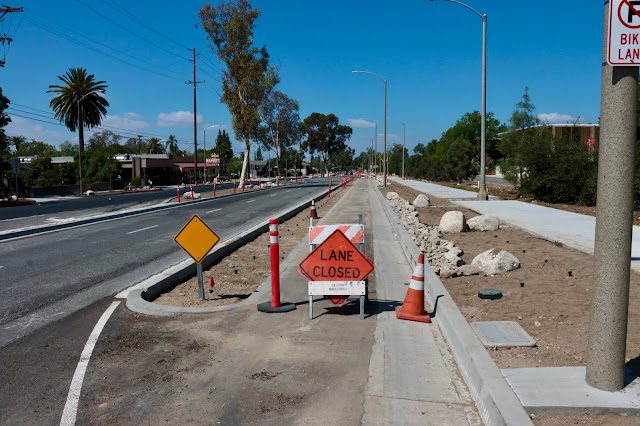 More west-bound lane and, though I can't quite recall now, I think this is where it picks up again just west of the entry drive to the Rancho Santa Ana Botanic Gardens. Sidewalk is also new. The section ends at Harvard to provide access to businesses, the Methodist Church and University buildings 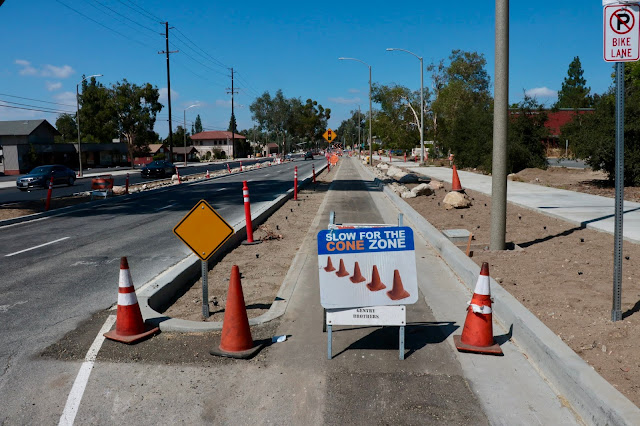 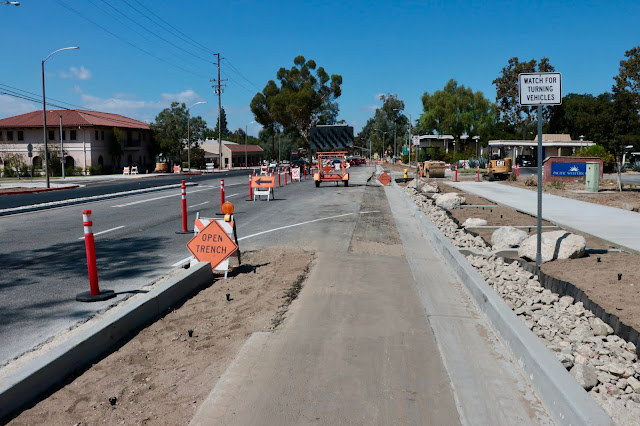 End of the last section of separated path, roughly at Yale Avenue, with Indian Hill Blvd in the, somewhat, near distance.

Though for this post I only covered the section between Indian Hill and Mills, the improvements continue both east and west from those streets to the city limits. West of Indian Hill, for both directions will have Class II bike lanes only (no separated lanes), but will also include new sidewalk along the south side of Foothill. East of Mills, Foothill with have both Class II and sections of Class IV bikeway on both east and west-bound sides of the street, as well as sidewalks where none previously existed. I will look to cover both those sections under separate posting in the near future.

It is coming along nicely, is going to look good and, since we know that people feel safer on separated paths, will hopefully encourage more people to consider Foothill a viable route for bicycling now. Incidentally, though the east-bound side does not have as much separated path, the right lane (where the Class II bike lane will be marked) is still wider than a normal traffic lane and did not feel "pinched" even at the corner bulb-outs.